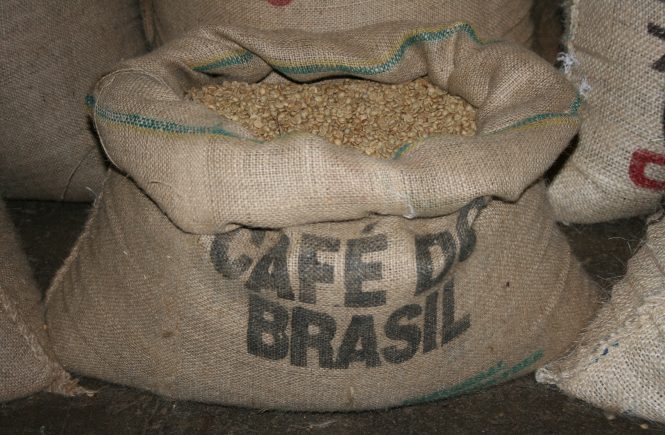 My nose was first to alert me to the proximity of a unique Corsican institution.  In a small square, in the bustling market town of Ile Rousse, Le bon cafe has been roasting coffee since 1928.  Run by the same family throughout, the working roasting house is just as much a shrine to the drink as it is a working concern.

As I entered, every coffee-making device imaginable seemed to be showcased from floor to ceiling, and there were jute sacks piled high all over the place, each fit to burst with green, un-roasted coffee beans.  Vietnam, Ethiopia, Costa Rica, Nicaragua – each bag was stamped proudly with its place of origin.

The beans were to be carefully blended by the very friendly and passionate proprietor Monsieur Duhé.  Quite how the bean selection was made remains a mystery to me, as a bit of this one, and a bit of that, was thrown into a bucket.  However there is clearly much method in this seemingly haphazard process, as I was to find out later when I tasted the end result.

Once Monsieur Duhé was happy with the correct blend of beans they were thrown into the hopper at the top of the noisy coffee machine that was roaring in front of me.  This mechanical monster has been in operation throughout the family’s tenure since 1928.  It needs lots of heating up before the beans are added to get the perfect roast – critical for the sugars in the beans to caramelise and produce the best flavour.

I’m told it ‘takes the skill, careful eye and smell of the roaster to achieve the best results’.  Monsieur Duhé was meticulous and rather intense in his regular checks, removing a small sample of the beans every now and again to see if they were ready.

After about 30 minutes, when the beans were deemed to be just right, they were sent streaming onto a revolving cooling rack.  The slowly spinning disk had paddles which gently turned the beans helping them to cool ready for storing and grinding.  I can’t begin to describe the smell that enveloped me at that point, the warm beans exuded the most extraordinary rich aroma.

As if my nose hadn’t had enough of a work out, just around the corner I found Boulangerie Tomasini and the smell was utterly alluring!  With queues stretching out onto the street I knew there must be something good inside, and with closer inspection I discovered a production line of baguettes being purchased as quickly as the master baker was cooking them. It was clearly hot work as within minutes the gregarious, mischievous-looking baker had peeled off his shirt and was busy working away bare chested!!  Maybe it was just the sight of my video camera, I’m not sure, but either way the glass-walled kitchen behind the shop made for great viewing – for the bread making, of course! The Tomasini production line was quite something, with vast trays of pale-coloured dough being pushed into the glowing inferno one moment, and another packed with golden, risen batons appearing the next.

Of course I couldn’t resist. Minutes later I was armed with a warm baguette, and a bountiful selection of fresh produce from the local market, ready for one of the finest picnic lunches you can imagine.