Whilst UK fish stocks aren’t what they used to be there is still an awful lot of fantastic fish out there.  Supporting your local fish monger or getting down to the coast and chatting to fishermen directly is such a joy and helps keep the industry going.

Recently on a trip to Hythe, on the Kent coast, we visited Griggs of Hythe for brunch.  It was a beautiful, crisp spring morning and the hour was most definitely civilised (previous forays to fishing harbours and markets around the world have usually required a 4 or 5am wake up call!).
Whilst walking on the beach a fishing boat came into view and I watched with anticipation as the crew winched the vessel onto the pebble-ridden beach.   Their cargo was soon revealed, in laden baskets and crates thrown down onto the beach, each one causing increasing excitement from an ever-growing crowd.

Whelks came first, quickly followed by a crate of beautiful looking cod and bass.  Then the stars of the show were revealed – local lobster and scallops sitting pretty in a melange of other briny finds.  The lobster weren’t as excited to be there as we were.  They were clearly up for a fight and in feisty spirits as they grabbed onto everything they could find, including each other. Not being able to resist the thought of cooking and eating something so fresh and so special, I was quick to secure a price for both lobster and slipped them, pincers down, into my bag. We made a quick but excited exit and returned with great anticipation to our kitchen.

The lobster were dispatched as humanely as possible (placed into the freezer for 15 minutes to become drowsy) and cooked simply in boiling water, before being served with a delicious and easy beurre blanc.

Love is in the air 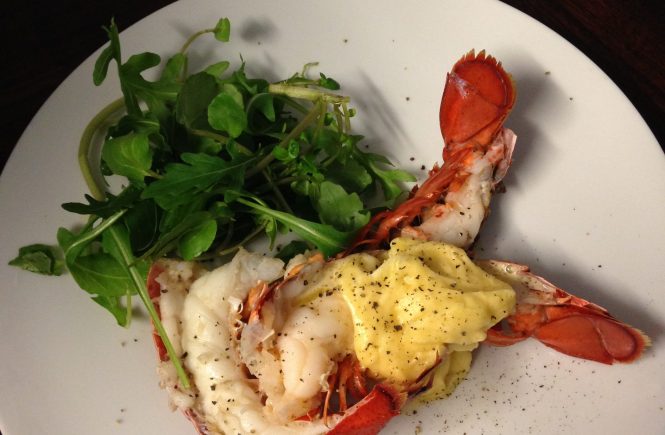 If you’re cooking for Valentine’s Day this year then something quick and easy is just the ticket – leaving you plenty of time for eating, drinking and romance!

Lobster tails are luxurious and a lovely treat – they’re also incredibly versatile and super-speedy to cook.

Try them split in half, brushed with butter and grilled until opaque and thoroughly cooked.

Make your own mayonnaise to go with it by whisking an egg yolk, some lemon juice and seasoning together, then very slowly adding light olive or sunflower oil, drop by drop, until thick and unctuous.

You can do this in a food processor for ease and speed too.  Delicious with chips and salad on the side.